While the most of the plants seem to be doing well (many look like pancakes - that's how I like them!), these four had growth troubles this year. 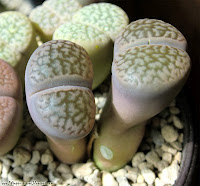 I'm least concerned about this hookeri v. dabneri. I've been writing about it a lot before. This year it grew two heads and was getting longer and longer for some reason. Now the bottom is definitely thickened so that I assume the new leaves are already down there, which is good news. Even if they won't break through on their own there is a surgical correction method I can apply. It's okay as long as the new lobes are on their way.

The hookeri seems to have a future ahead of it, but I'm not so sure about this julii ssp. fulleri v. fulleri. It's one of my oldest and most beloved plants (last year's picture), and it is painful to see it like this. Obviously it bursted because it was overfed, but look at its pot-mate - it grew just fine and is wrinkled all over while being firm and well-shaped. So how come? Well, thinking positive, other than that it looks like it's doing well. And there's a chance at least one head will make it.

The next two guys are simply weird. I sense bug activity, but will have to look at the roots to confirm. This hallii v. hallii C052 from before has turned purple and shows underdeveloped parts. Other than transplanting it (getting rid of possible nibblers) there's nothing much to do. 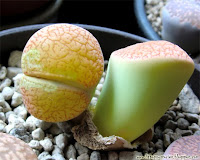 Same goes for this aucampiae v. koelemanii. It's twisted, bitten and what not, even though its pot-mates are fine. I guess things like this just happen. There are losses every year. It's just more noticeable if you don't have that many plants.
I'll keep you updated!
Eingestellt von Rika um 7:55 AM