I've been transplanting some of the lithops to get rid of bugs on tuesday. Not only there were mealy bugs but also a lot of tiny grey stripy ones (don't know what exactly they're called). 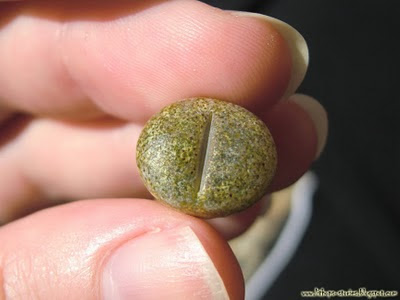 I've seen the damage they do to cacti before. With lithops it's probably not as dramatic because the bitemarks will go away next year if the plants survive until then, but it sure isn't pretty. It was the worst for the little seedlings of lesliei ssp. lesliei v. minor C006. On others only the body was affected, not the top. The lesliei have the marks everywhere except where the old dried out leaves were.

Well, now that they were washed and bug sprayed, there's nothing more to do at the moment but wait. Tomorrow the new square pots should arrive so that other older plants can be checked, sprayed and transplanted. Some do look like something's nibbling on their roots.
Eingestellt von Rika um 3:13 PM